CARTHAGE, NY – The Continental Congress in June 1777 officially designated a 13-stripe flag, representing the original American colonies, as its national banner. Over the years, the American flag has been redesigned more than two dozen times. Today, wood artisan Jim Hamilton handcrafts wavy wooden flags that honor not only America and her armed forces, but her police, firefighters, and other front-line emergency services personnel.

Jim lives and works not far from the Fort Drum U.S. Army Garrison, home to the 10th Mountain Division, in northern New York. About three years ago, Jim’s friend and U.S. Army veteran Joe Corley prompted Jim to make the wooden flags that appear to wave out horizontally or drape vertically.

“Research and experimenting led me to the process I now use, and, yes, Joe did get a flag,” Jim said.

He creates flags to honor all five branches of the armed services and one in remembrance of America’s POW-MIAs. All of Jim’s flags fit proper American or military “brand” standards from a traditional 50-star flag and a 1776 13-striper to respectfully distressed versions.

Lots of sanding, shaping, painting and finishing go into making the flags. Jim hand-cuts the stars from 13 to 50. One of his custom-requested flags featured a U.S. Navy flag with a depiction of the Cimarron class oiler U.S.S. Waccamaw, named for a river in South Carolina. Two of his Vietnam veteran flags have been flown to Vietnam to receive a certificate that they have flown there.

Flags from Jim’s “Northern Rootz” workshop include American flags with a firefighter’s axe added and one with half a U.S. flag and half a police flag with the inscription: “This is why we’re free. This is why we’re safe.”

Jim is a lifelong woodworker, from a career in construction to now transforming wood into rustic furniture, garden benches, a combination bench-picnic table, coolers and custom orders. His wife Brandie works alongside Jim, particularly lending her artistic ability to home décor items. The American flags, however, have become Jim’s signature item.

“By far, our American flags are our most popular and most requested item,” Jim said, and each one he makes is a unique creation and numbered.

“The reaction I observe from people viewing and touching these flags is truly impressive. To think that wood, stain and hours of labor can trigger such emotions from people gives me a feeling of accomplishment and motivates me to continue to make something that I take great pride in,” he added.

To learn more and to see photos of in progress and finished flags and other projects, see the “Northern Rootz” Facebook page. Jim can be reached via email at northernrootz@gmail.com or by call or text at 315.552.8347. 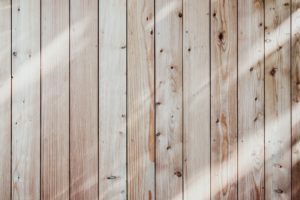